My current project had an interesting requirement come through: “We want the app to navigate to another single page app when the user clicks next on this page, but still have our widgets at the top”. The client wanted to utilise an existing durandal SPA inside a new durandal spa.

Note
This post is relates to the Durandal single page app framework. If you are not working with Durandal you are probably going to find it very dull.

This is the requirement I was given: 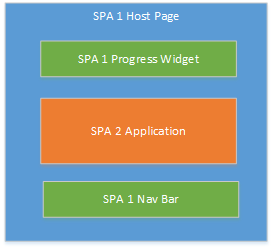 A SPA within a SPA using Durandal. Why? well, we have some existing SPAs that the client wants to reuse, but they need to run within a new SPA - as part of a multi-step process.

There are two ways we can achieve this:

Using compose is easier and faster, is only useful if you only want to use a single view. If you have a bit of complexity in the 2nd SPA, child routers are going to give you far more flexibility.

Exactly what they sound like! A router that is logically a child of another router. They allow you to include an entire navigation structure from one spa, in a second SPA. As an added bonus you can raise events from one SPA to the other.

As I have multiple pages and some complexity to deal with, I’ve gone with a child router (rather than trying to jam in multiple views with compose).

Here is my folder structure:

Here is the sequence of events when the user loads the SPA:

Here is the code we need to make it all work.